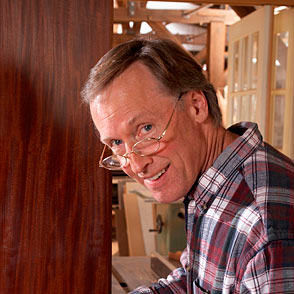 David Lamb’s first three years as a woodworker were spent using only hand tools. At 15 he began an apprenticeship with Alejandro de la Cruz, a Spanish-born and traditionally-trained furnituremaker who happened to live a half mile away from Lamb in the small town of Canterbury, New Hampshire. De la Cruz trained Lamb the same way he had learned—by mastering hand skills first. Lamb went on to attend the Program in Artisanry at Boston University, where he studied under Jere Osgood and Alphonse Mattia in the late 1970s. Afterward he returned to New Hampshire to set up his own shop. Lamb’s furniture, dazzling in its detailing and impeccably made, is infused with some of the classic lines and shapes of American Federal and Rococo work. But it also brims with his own innovations and distinctive style. Hand tools remain an essential part of Lamb’s kit, but over the years he has developed a special affinity for old woodworking machines. In particular, he fell in love with machines made by the John White Company in New Hampshire between about 1860 and 1910. He bought so many that he had to add a special machine room to his shop to accommodate them.