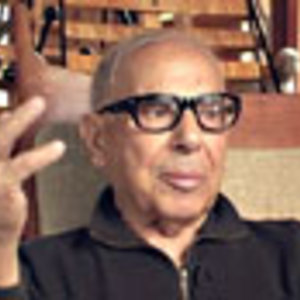 Sam Maloof is the self-taught master of contemporary American furniture, creating pieces throughout the 20th century that combine the art of design with the necessity of comfort.  Born in 1916, the son of Lebanese immigrants, young Sam carved wooden toys for himself, but did not begin to make furniture professionally until the late forties, after quitting the corporate world to do what he loved most. Within ten years, Sam Maloof’s name was known to woodworkers and rocking chair devotees throughout the world.

In 1985, Sam received a prestigious Mac Arthur Foundation “Genius” Fellowship.  Forever humble in the face of his status as a master artist, Sam refuses to think of himself that way, preferring to be called “just a woodworker.” Fans such as Ray Charles, Former President Jimmy Carter, and Former President Ronald Reagan might disagree: each own their own Maloof rocking chair.

Sam is the founder of the Sam and Alfreda Maloof Foundation for Arts and Crafts, a non-profit organization encouraging artists and craftspeople from all walks of life.  The foundation also maintains the historic masterpiece that was Sam and Alfreda Maloof’s home for almost half a century before being named a national historic landmark and relocated to Alta Loma, California. In addition to his workshop, the grounds showcase meticulously kept gardens and acres of lemon, fig, and olive trees that Sam planted himself.

Among other museums, Sam’s work can be found in the Metropolitan Museum of Art in New York City, the Smithsonian Institute, and the White House.