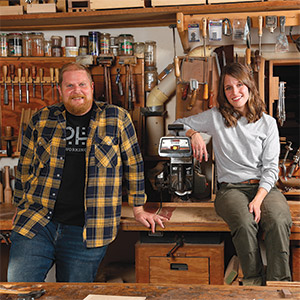 In 2016, Larissa Huff and Rob Spiece took over Lohr School of Woodworking from founder Jeff Lohr. Turns out, fate and Craigslist ads had brought them both to Schwenksville, Pa., to work with Lohr. The school was established in 2001; Spiece began his apprenticeship there in 2006 while Huff started hers in 2012. Together they make custom furniture and teach woodworking to students from around the world.

Huff on Spiece: “Rob is hilarious, incredibly talented, and cultivates a collaboration process full of conversation and questions. He also makes killer shop playlists. He works so much faster than me! In the time it takes me to finesse small details just the way I want, he has built an entire section of the piece we are working on. I tell myself it is not competition, but I am always so jealous of his speed.”

Spiece on Huff: “She drives us to make interesting work and isn’t afraid of challenging me or herself. She’s also simply an easy person to work with and a good friend. In all honesty, we do have disagreements, even arguments from time to time. I see that as healthy and necessary for a real collaboration.”