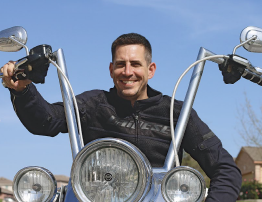 After high school, worried about paying for four years of college, Jason Stephens entered the U.S. Army instead. Knowing Stephens was a drummer in high school, his recruiter suggested the Army band program. Twenty-four years later, Stephens has traveled to 60 countries with the band. One of his warmest memories is playing marches and Glenn Miller tunes in Normandy, France, on the anniversary of D-Day. “French Normans wept at the sound of American music played by American soldiers.” Stephens learned woodworking at the shops on Army bases. He recently retired from the Army, and is looking forward to having a shop that stays in one place.