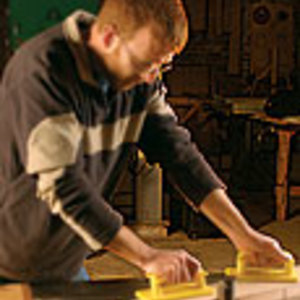 Among the most vivid childhood memories of J. Speetjens is building a sailboat with his father. Speetjens began his woodworking career after completing a course in stringed-instrument making at the Roberto Venn School of Luthiery in Phoenix. He then began his career designing and building electric guitars. He worked for several instrument and cabinet makers before opening his own shop in Greensboro, N.C., in 1993, where he sells original work directly and through select galleries. He also teaches aikido, a Japanese martial art, at a Greensboro dojo, and says he incorporates the concepts of aikido into his original designs.