Book Excerpt: Pull Up A Chair by Mike Dunbar 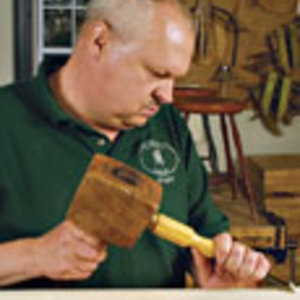 Pull Up A Chair is a collection of essays by Mike Dunbar, founder of The Windsor Institute. For years he sent monthly essays about chairs to his students and this volume covers 2007-2011. Below we feature an excerpt from Jan 15, 2011: Tennessee Chairmaker Frank Tabor.

2/8/17: We have a winner. James is the lucky winner. Come back for more great giveaways. 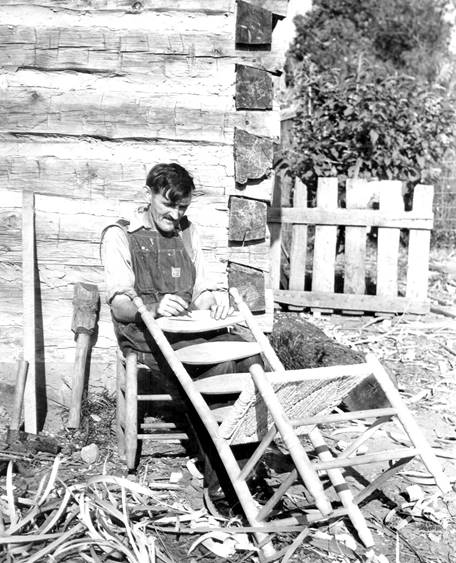 To the left is a photograph of Tennessee chairmaker Frank Tabor. I know this because the photograph was once printed in a publication, or perhaps sent out by a news service. This is most fortunate; as otherwise, the subject would be anonymous. He’s known to us because the publication or news service attached information on the back that identifies Tabor, as well as the place and time. Curiously, the time was four days after I was born. 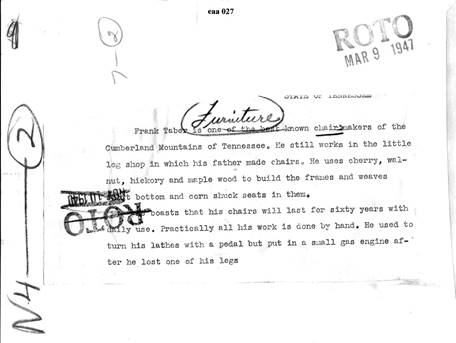 This typewritten info is shown in the lower photo. Anyone who has worked in a newsroom will recognize the editor notations written in pencil. I have not transcribed the text, as I think you can easily read it. Note that the typist misspelled Tabor’s last name, writing it as Taber. That error did not help me in my research.

A Google search for Frank Tabor (as opposed to Taber) comes up with the same picture on file in the Tennessee State Library and Archive. The photo was also included in the 2004 book Rural Life and Culture in the Upper Cumberland by Michael E. Birdwell and W. Calvin Dickinson. They write about Tabor: “Chair making has a long tradition in the Upper Cumberland. Men such as Preacher Tinch would harvest and season timber, carefully selecting the proper wood to make a sturdy chair that would last for generations. The Frank Tabor family from eastern Cumberland County made ladder-back chairs from oak, selling them at the Lowe shop in Rockwood and Bilbrey’s store in Crossville. Using traditional hand implements – axe, adz, maul, drawknife, and plane – the Tabors produced chairs for more than 30 years. Frank Tabor learned the craft from his grandfather, who primarily made wagons. The patriarch made chairs on the side, which he hauled from Westel to McMinnville and points in between, trading for salt, coffee, and sugar.

“To make a chair, Tabor first hewed out a log with an axe. Sections of log were split and further shaped on a shaving horse, and the spokes were dressed down with a drawknife and carving knife. Wood chisels expertly tapped with a hand maul hewed the legs. The slats for the chair back were split and shaped on the shaving horse with a drawknife and plane. Pieces of the chair were driven together with mallets without nails, screws, or glue. The finished structure was then bottomed with white oak splints. Simple, functional, and strong, the chairs were held together by the tension created as the wood continued to cure, made sturdier by the tight split oak bottoms. Tabor chairs proved so sturdy that a popular saying in the region was, ‘Always club your enemy with a Tabor chair ‘cause it won’t shatter when you flail him.’ Frank Tabor made chairs until his death in 1968.”

The above quote reads like it was written by historians, rather than chairmakers. We have a much better understanding of Tabor’s process and would not make their mistakes. Tabor began by felling a tree with an ax, not hewing it. Wood chisels were not tapped with a hand maul to hew the legs. They were turned on a lathe as is obvious from the picture, and as the illustrated text recounts. We know that Tabor’s lathe was a foot powered lathe, and he only attached a small gas engine after losing one of his legs. I would like to know more about that detail and wish someone had recorded it. The historians also focused on something that always amazes me, as this is often written about my work. “He makes these strong, beautiful Windsor chairs without any nails.” Yeah, and your point is?

I did love the line about flailing your neighbor with a Tabor chair, because when he goes down, he will be down for the count. The advice is so matter of fact, one wonders if beating people over the head with a chair is a regular activity in Cumberland County. When you go out on Saturday night, do you select a chair to bring with you? “I don’t think I’ll take a Dunbar chair tonight. Ralph Quick is in town. Better bring a Tabor chair; it won’t shatter when I flail him with it.” Tabor himself was more modest and merely claimed his chairs would last 60 years.

The photo is important as it gives us so much insight into a tradition that has faded, that of rural chairmaking. Frank, who along with one of his legs, appears to have also lost most of his teeth, is sitting against a log building. Some of his tools are propped up behind him. He is sitting in a chair and has pulled another back towards himself. Drawknife shavings are heaped up around him.

Do you remember the recent picture of the English guy caning a chair seat (8-15-10) that I identified as a staged photo? I am sure it also occurred with this picture. I know because I’ve gone through the same thing over and over, every time a newspaper sends by a photographer. “Let’s get a picture of you working. Take that chair and pretend to being doing something to it. Wait, let me sprinkle some of these shavings around.”

In this case, the photographer said to Frank, “Let’s take that chair and go outside where there is more light. Sit there against that really quaint log building and pretend to be doing something to that chair.”

“The chair is done, yer damned fool,” Tabor replies. “There’s nothin’ more to do, but put a finish on it.”

“I know. I know,” the photographer answers. “Just pretend. Wait. Let me gather some these shavings scattered around the yard. I’ll pile them around you so it looks like you’ve been doing something. Wait. Wait. We need some tools. I like that club. It looks rustic. Fits right in.”

“Damned citified idiot,” Frank mutters under his breath. “I’ll goof on him by doin’ somethin’ that makes no sense, like pretending to draw a line on this top slat. That way, any chairmaker who sees this pitchah will know I was havin’ this damned fool on.”

Over the past couple of decades Frank’s rustic tradition has influenced the way some Windsor chairmakers present ours. That is too bad and these people should know better. Quaintness may appeal to some customers, but it is a perversion of our craft’s history. Windsor chairs were an urban chair, and had almost no association with Frank’s craft tradition.