If you want to know what it’s like to fly too close to the sun, visit Las Vegas in summer. Several Fine Woodworking editors learned firsthand about triple-digit thermometer readings after arriving in that desert city in mid-July, as afternoon temperatures topped out at 108ºF. Thankfully, many Las Vegas attractions are inside, where air conditioners work 24/7 to keep everyone comfortable.

We were there to attend the biennial fair of the Association of Woodworking and Furnishings Suppliers (AWFS), held at the Las Vegas Convention Center July 17–20. During the four-day show, more than 30,000 members of the woodworking trade walked the 476,000 sq. ft. of floor space to visit over 900 exhibitors. Many manufacturers use the AWFS fair as a venue to introduce new tools. So for anyone with sawdust in their DNA, this was the place to be, with cool new tools making you forget how scorching it was outside.

Here’s a sampling of what we saw.

Sawstop Contractor’s Saw on the Horizon 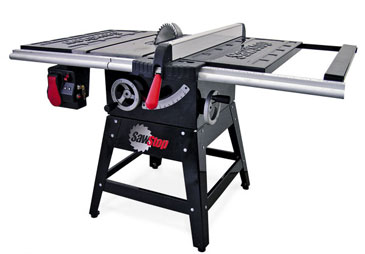 Look for the saw to have a 1-3/4-hp motor, a true riving knife that moves with the blade, and, of course, the remarkable SawStop blade-stopping safety device. Wings are stamped steel, with cast-iron wings as an option. A mobile base is also optional.

The price isn’t finalized, but at this point it’s targeted at $1,500. For more information, check out www.sawstop.com. 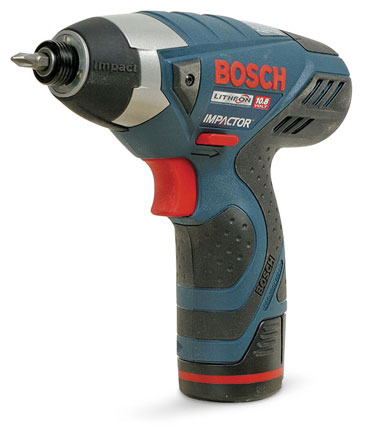 At the Bosch booth, we spotted a new impact driver, model No. PS40-2, that looks to have been designed with woodworkers in mind. It weighs less than 2-1/4 lb., so you’re less likely to grunt while using it. And, it’s only 6-1/2 in. long; ideal for getting into tight spots.

Power comes from a 10.8v lithium-ion battery, which packed a real punch in our tests of the similar Bosch screwdriver. A quick-change chuck accepts hex-shank driver bits and drill bits. Model PS40-2 sells for $195. A 30-minute charger and spare battery are included. For more information, go to www.boschtools.com.

Steel City Offers a Granite-Topped Tablesaw
Visitors to the Steel City Toolworks booth were astonished to see a 10-in. cabinet saw, model No. 35915G, with a top and wings made from granite rather than the usual cast iron.

According to Steel City, granite has advantages over cast iron: It won’t rust; it stays flat forever; and it is harder than cast iron, so it will wear better.

The nearly 2-in.-thick granite adds about 60 lb. to the saw. It also adds about $50 to the selling price.

On the downside, granite is brittle when compared to cast iron, and a dropped wrench could cause a chip. The surface could be repaired by filling the cavity with epoxy.

The Steel City saw also includes a riving knife, a valuable safety feature because it reduces the chance of kickback, a common cause of tablesaw injury. For those occasions when the riving knife must be removed for a cut, a quick-disconnect system makes it easy to remove and replace the knife.

A 3-hp, 220v motor generates the power. Rip capacity is 50 in. The saw, which will sell for $1,250, will be available in January. For more information, go to www.steelcitytoolworks.com. 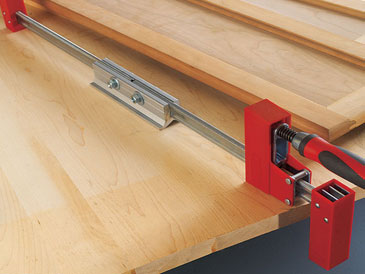 Bessey Tools (www.besseyclamps.com), maker of the K Body clamp, introduced a new clamp extender. Made from aluminum, it allows you to stretch the capacity of any two K Body clamps to create a longer one. 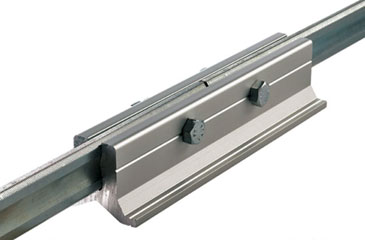 And, it does not affect the clamp’s strength and parallelism. The extender sells for about $15.

Powermatic Integrates Tablesaw and Workbench
Most woodworkers can use an extra workbench, so Powermatic now offers one that mounts to the side of the PM2000 cabinet saw with 50-in. rails. Since the bench fits between the rails, it doesn’t take up additional shop space. The bench, made from beech, adds about $300 to the cost of the saw. It includes an end vise and benchdog holes. Details can be had at www.powermatic.com.

Rikon Adds a Cabinet Saw with a Sliding Version
The first cabinet saw from Rikon Tools has a 10-in. right-tilting blade powered by a 3-hp, 220v motor. And, in the “Why didn’t somebody think of that before?” category, the saw includes a storage drawer near the cabinet base to take advantage of what mostly has been wasted space.

Grizzly 10-in. Cabinet Saw Now Has a Riving Knife 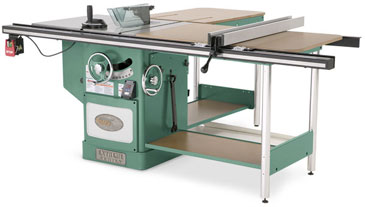 Grizzly’s new 10-in. cabinet saw, model No. GO651 (above), has a couple of good safety features: a riving knife and a generously sized outfeed table. Kickback is less likely when a tablesaw has a riving knife, because it can be left on the blade for almost all cuts.

The outfeed table supports stock after it passes through the blade. That means you don’t have to bear down extra hard on the end of the board (just as your pushing hand is closest to the blade) to keep the stock from tipping off the table.