Mortise-and-tenon joinery in a power tool
True innovations in portable power tools are rare. The random-orbit sander, the biscuit joiner, cordless technology: the big leaps forward are few and far between.

Festool, a German company, stands out for re-inventing a number of old-faithful tools in recent years. Readers will recall the plunge-style circular saw with guide track, as well as a high-end cordless drill that accepts three different heads. Mind you, unmatched engineering comes at a premium, so these tools are not for everyone. 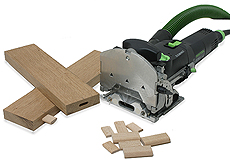 Festool makes special floating tenons used to join two mating mortises. The beech tenons come in various sizes and are embossed with fine lines for improved gluing. These press into their mortises perfectly, and then expand slightly when they hit the glue. The tenons come in three thicknesses, each requiring a different bit.

The full system includes the beech tenons in various sizes. Though the largest tenons are only 3/8 in. thick by 2 in. long by 7/8 in. wide, the uniformly machined mortises and perfect-fitting tenons added up to very strong joints, especially when used in twos or threes. 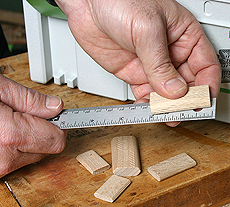 We didn’t have time for a true joint-strength test, but I can recommend these joints for cabinet doors, drawers, face frames, many chairs, and all tables just shy of dining size. That amounts to at least half of what I build.

Fast, accurate, pricey
The real sizzle here is speed. I assembled an entire table, with two tenons at each joint (32 mortises in all), in about 1/2 hour, with perfect alignment of parts. I can’t think of a way to do this faster with the same strength and results–not even close.

When using the tool, it’s important to clamp the workpiece, hold the unit down firmly, and let the tool cut. you’ll need to plunge slowly into the hardest woods.

Chairmakers will like the accessory that supports narrow parts to allow end-grain mortises at various angles. And once you get your hands on this machine, you will find other uses for the unique cutting action.

The downside for some woodworkers will be the price, estimated at $700 for the basic kit with one 5mm cutter, and another $200 for a starter kit that includes four cutters (5mm through 10mm) and over 1,000 tenons in various sizes. The cutters are tipped with carbide to stand up to the slightly odd cutting action. 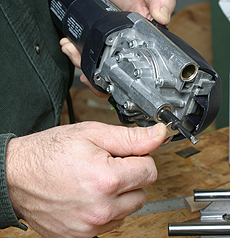 Settings for depth and width of cut (oscillation) are precise and easy on this tool. As with a biscuit joiner, you reference off a movable front fence to get different slot locations and angles. The Festool’s movable fence is nicely designed for the most part, with detents at common angles and a series of vertical stops.

We had one problem with the fence. One of its pivot pins dropped out and had to be re-inserted and tightened.

Worse, though, part of the clamping mechanism broke. With lots of people using the tool in our shop, we can’t say the broken part wasn’t the result of user error. Still, close examination of the break reveals a thin cast section that must withstand considerable pressure if the fence is overtightened. Festool replaced the front half of the machine, and there have been no problems since.

Bottom line: Don’t overtighten the clamp handles on the fence; they don’t require much pressure.

Final thoughts
I have only a few other quibbles with the tool. While the bit oscillates to three mortise widths–up to 1-1/4-in. wide–tenons come only in the narrowest width. The company says that the extra width is to ease assembly when the mortises are used in rows, but Festool is missing an easy opportunity to provide more substantial tenons. 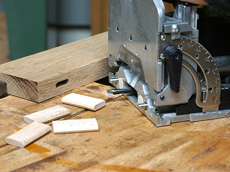 Alignment pins in the front of the tool, which can reference off the corner of a workpiece (making layout unnecessary), are a great idea but are too far from the edge of the mortise to be useful in some cases. They leave too much room for twist at the corner of a frame, for example. Of course, the tool also can be aligned with center marks, like a biscuit joiner.

Dust collection is critical with this tool and the system worked will when coupled with Festool’s dust collector. The airflow from the dust collector keeps the motor cool and clears the chips so the cutter doesn’t bind in a deep slot.

Overall, the Domino is an impressive tool that could change your woodworking. For more information, visit www.festoolusa.com.