Wood movement in a small box

I’m working on a small box (roughly a 6″ cube) with a decorative lid. The lid consists of a 3/8″ thick panel made like a miniature end grain butcher block cutting board which floats in dados in a mitered frame. The end grain panel was too loose so I added floating shims in the dados that made it fit snugly. Do you think that the wood expansion when the humid summer arrives will be enough to split the panel or break the frame? How do expansion and contraction in an end grain butcher block compare to expansion and contraction in a solid board?

I’ve struggled to find specific information about wood movement in end grain butcher blocks, and I haven’t been able to find ANY information about miniature end grain butcher block used decoratively (is this because it’s a bad idea to begin with? Or because there are easier ways to create a similar effect?)
Everything I’ve been able to find online about wood movement in general says that when working with such small sizes it isn’t quite as big a consideration as in larger pieces, but I still tried to avoid doing anything I know would be problematic (like gluing end grain directly to face grain or something).

I’ve already glued up the lid (see pictures) so to some extent this question is rhetorical — I don’t think I could disassemble it without damaging it. Maybe come June this piece will just explode and it’ll be a learning experience. If the consensus on this forum is that this is a terrible idea and the box is likely to fail then I can just make a new lid with a different design. 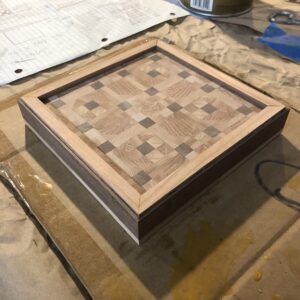 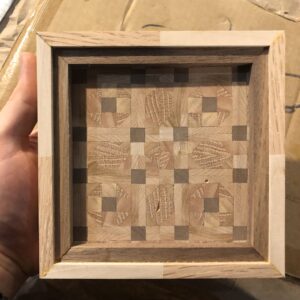