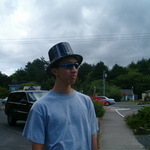 First of all, I would like to state that while I am not Garrett Hack, I am quite familiar with handplanes.

In the case of smoothing a large workpiece such as a tabletop, the traditional method involves starting with a jack (or jointer) plane in both diagonal directions before going with the grain to remove any high spots.  Then, you switch over to a smoothing plane to “further smooth” the surface.  Why is it necessary to follow up with the smoother?  I find that a plane with more mass and a longer sole (the jack) does an equal if not better job smoothing than the smoothing plane.

My only logical reasoning to use a smoother is that:
a)  The blade is sharp whereas the jack’s blade has dulled.  This means you don’t have to stop to sharpen.
b)  The blade is cambered in the smoother though there’s no reason one wouldn’t use a cambered blade in the jack in this situation.
c)  Who wouldn’t want an excuse to own another plane?

– Success is not the key to happines.  Happiness is the key to success.  If you love what you are doing, you will be successful. – Albert Schweitzer