I am currently building a grandfathers clock and the plans I have call for the front frames to be glued to the dowel braces but the back frames note that they are not to be glued and as you can see in the attachment holes are added thru the back frame and screws are used to secure it to the dowel braces. Why wouldn’t you just glue the back frame also and eliminate the screws showing in the back. Is there any reason for the plans approach to this? One more question, you will see that the side panels which fit into a 1/8″ slot state that they should NOT be glued. The slide panels will just be held in by the slots. Wouldn’t you want to also glue these side panels in to make an overall rigid and strong design? There are three other sections of the clock which are all done with the same design approach. Would I cause any problems if I would glue it all instead of using screws for the back?
The attached image is from the set of plans for the clock which shows the typical design approach with gluing the front frame and using screws for the back frame.

Thanks for some of the comments thus far. There are four sections to this clock, base which is shown in the image, the body, neck and face. The face would be the only section that I would want the back attached by screws for access to the clock mechanics like some of you had said, but the other sections there would be no reason for that access. So for theses other sections would there be a concern to glude the back frames.
Good point about the side panels, they should not be glued for expansion and contraction of the panels. 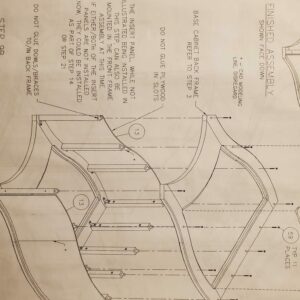