I bought a new Jet lathe last summer, and one of the things I’ve been doing is turning little finger tops with it, mostly for practice, and it’s pretty fun too. At this point I can turn one out in 7-10 minutes, and I’ve accumlated a pile of them.

So, this weekend at a big family gathering, I stuck a bunch of them in a bag and brought them along to see what interest I could generate withBut  the pre-teen and teenagers who were going to be there. Frankly, I didn’t expect much. These are kids who spend a lot of their lives with their heads buried in video games and other such nonsense.

So, you can imagine my surprise when I dumped them all out on the foyer floor and the kids pounced, scrambling around to see which ones spun the best. There were “top wars,” timed spinning contests, and other competitive events. One of the younger girls attempted to learn to spin a top with her toes. And half a dozen “new age” kids were captivated for a full half hour. Amazing.

One of my brothers-in-law came by and said, “Hey! Tops! Is this some kind of Amish thing?” He, too, was fascinated by the level of interest in such simple little toys. Some photos…  Zolton

If you see a possum running around in here, kill it. It’s not a pet. – Jackie Moon 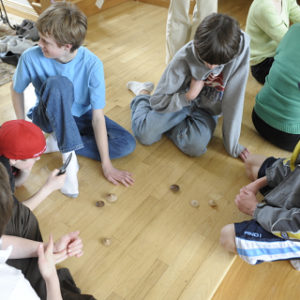