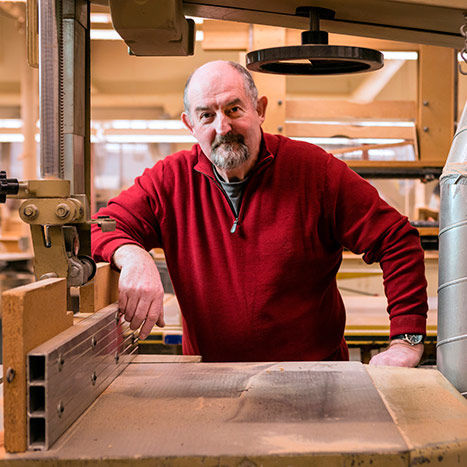 Within a couple of years of arriving in the U.S. from Wales in 1974, Terry Moore shifted his career path from playing rock music to working wood. He began by making kitchen cabinets but soon discovered he had a deeper affinity for hand work and fine furniture making. Moore, who now builds his award-winning furniture in a one-man shop in Wilmot, New Hampshire, is entirely self-taught, and he feels that’s fortunate. “Not having had a mentor has left me free to take in inspiration and design influence wherever I find them,” he says. He may have lacked a teacher, but he doesn’t lack appreciation for the power of teaching. For the past 16 years he has taught woodworking in Concord’s New Hampshire State Prison, in a program that enables prisoners to sell their work through a gallery. Not a single participant in the program has returned to prison after being released, and Moore says that’s no coincidence. Through woodworking, he says, “you learn problem-solving, patience, and self-discipline…it transforms their vision of who they are as a person.” Moore is also a founding member of both the New Hampshire Furniture Masters and the Guild of New Hampshire Woodworkers.