Every box has a story

Each of Michael Cullen's boxes is special, but some are more special than others.

Frequent contributor and California (for now) woodworker Michael Cullen is contemplating a big move, and in the process, he has been sorting through the contents of his home and workshop. Every object he finds seems to have a story, and this one—shared on his Facebook page—will surely resonate with many of us. He was kind enough to let us share it with you here.

I’ve been sorting through things and attempting to make decisions about what I want to keep and what I’d like to pass on. This task varies in its difficulty depending on the object.

Some of these decisions come easy and actually offer a sense of freedom. It’s like a weight has been lifted—a release from having to own and take care of something. But then there’s this box, which I made in high school or perhaps even earlier. It’s not so much the box but the story that comes with it. 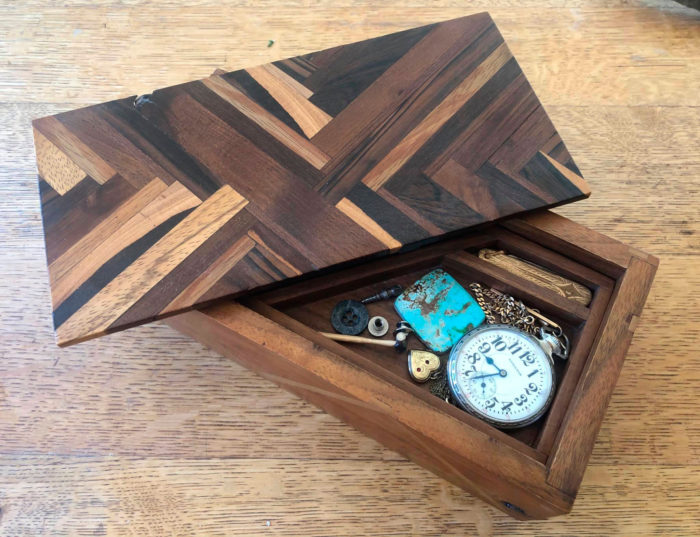 The top is made up of at least a dozen or more species of woods I bought (from Macbeath Hardwood) and had collected over my brief time as a beginning woodworker. I do remember aspects of making the box. I was obsessed with making it as strong as possible so I used dowels to “pin” the half-lap joints and a whole mess of them to attach the bottom to the sides.

My favorite memory is making the top. I spent hours and hours laying out the pattern and then dreaming about how it would look when it was all done. When it came time to cut and assemble the pieces, I took my time to carefully fit everything together and to make sure there was plenty of contrast between the different woods. I got so into the process—and mind you, this still happens to me—that I didn’t even think about the varying “heights” of the different pieces. Once it was all glued to the plywood, the top varied in thickness by at least 1/4 in. I was stuck! I went through my limited skill set and just couldn’t come up with a solution.

Totally frustrated, I finally showed it to my father, who simply said “I’ll take it to work and we’ll put it on a mill and flush that off till it’s perfectly flat. No big deal.”

A mill? What sort of machine was this that could perform magic so easily? A few days later, the top was back in my hands and I was on the finishing stretch to complete my box.

Now almost 50 years later, I’m holding that top once again, asking a different question. Is it time to pass this on? What will happen to it? Should I hide a story like this one in the secret compartment for someone to discover down the road?