After an inspiring trip to London, Tim Killen imported a museum photo into SketchUp to replicate a piece, from the comfort of his airplane seat

Recently in London, UK we visited the British Museum particularly to review Roman, Greek, and Egyptian antiquities including  furniture. One Egyptian piece caught my eye, a stool from Thebes – probably several thousand years old. To me, this piece could have been made in recent centuries – it did not look ancient. I took a picture but found a better one on the British Museum website, shown below. 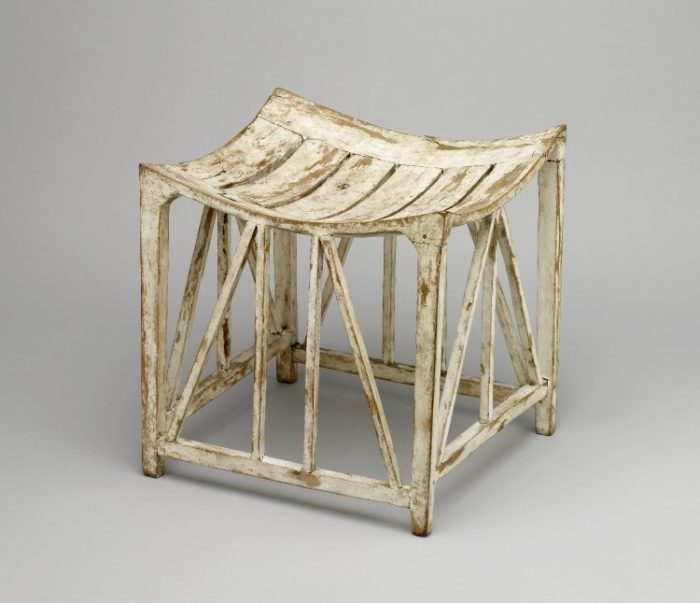 I was immediately fascinated by the structure, shapes, joinery, and angles. How would you make this remarkable piece? I can see they accommodated seasonal wood movement in the gaps of the seat. Looks to me that they used pinned mortise and tenon joints. Also the lower stretchers are staggered at the leg joint to allow non-interfering tenons. The spindles are arranged in two designs – one for the sides and another for the front & back. Those diagonal or oblique spindles are providing much stability and strength and greatly limit any racking.

So I decided I would build this stool. On the return flight, I opened SketchUp and began to capture this design. In the next few steps, I’ll show the major steps in SketchUp to develop an acceptable drawing package. There is also a video of this process. 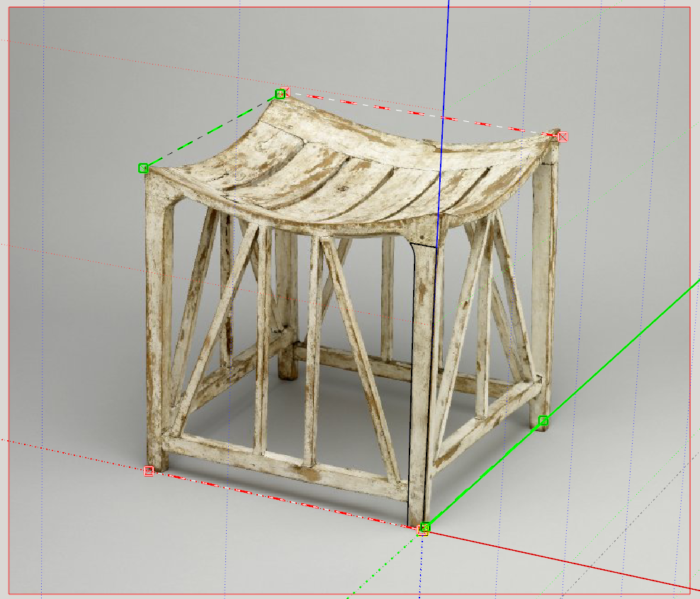 Step 2: With the Line Tool I began to traceover the component shapes, making them Groups at this stage. Note that I don’t bother sizing the photo at this stage. I know that it is several times larger than the actual piece, and this will be beneficial in doing some Intersection processes later. I’ll resize the model after working the design details. In the image below, I’ve selected (shown in blue) the resulting groups made in the traceover. 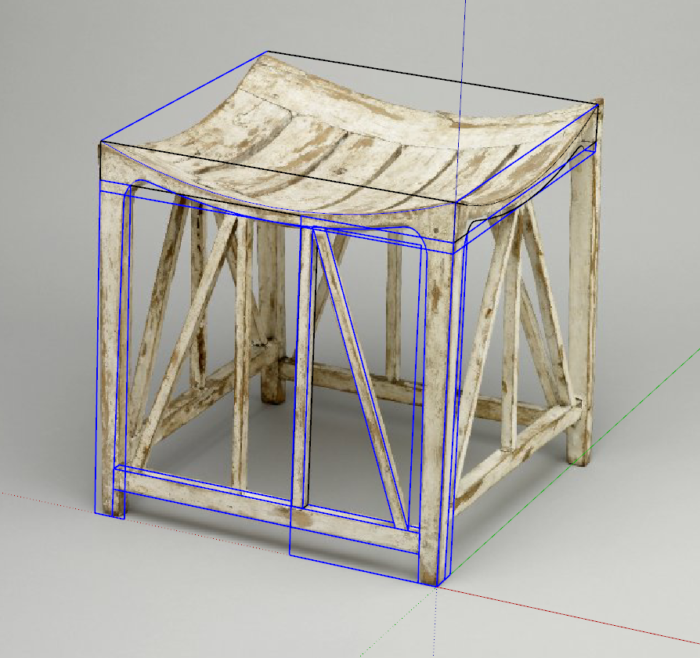 Step 3: In the next image I’ve shown the resultant traced-over groups. I made the Seat one Group at this stage, rotated a copy, then combined them to do an intersection. You can see the resultant full shape of the Seat on the left.  I’ll make the individual slats later in the process. 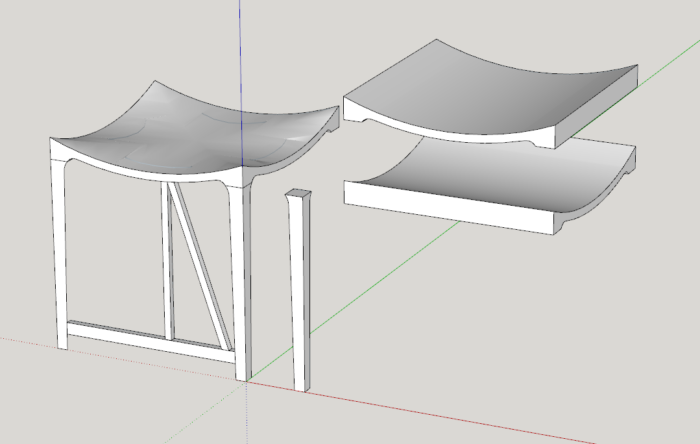 Step 4: In the upper right hand corner of the following image, I show a method to convert that overall Seat shape into its individual slats. The rectangles are cutting planes and with intersections, the slats are created. However at this stage the Slats are not separated by gaps for expansion/contraction. That will be done later by cutting off small slivers on each side (again using rectangular cutting planes). 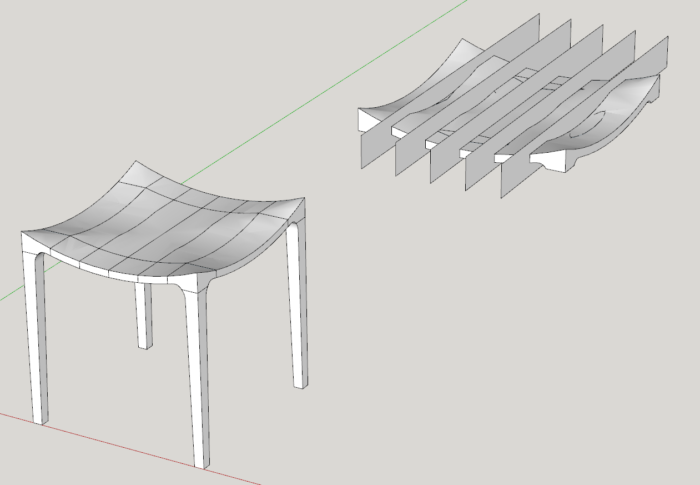 Stage 5: This step shows how I used cutting planes again for creating the Upper Apron components. 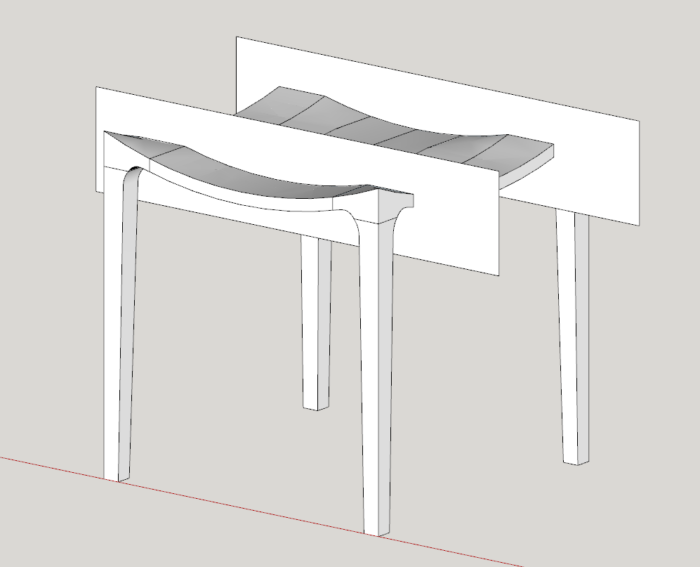 Step 6: I’ve shown here how the Seat is pieced together. Although there are 8 pieces, there are only 4 Components in SketchUp. 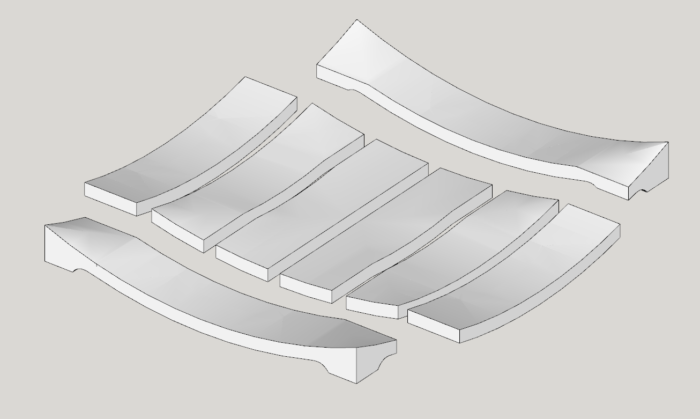 Step 7: I now have all the components in place in the overall structure, and ready to resize to actual dimensions. As I review my photo at the museum, I’ve estimated the height at 18 inches, and this is about a normal dimension for chairs. I use the Tape Measure and click on the vertical leg dimension. It shows about 79 inches, and I type 18. SketchUp shows me a message – “Do you want to re-size the model”. And I answer Yes. Now the model and all the parts are at the desired dimensions. 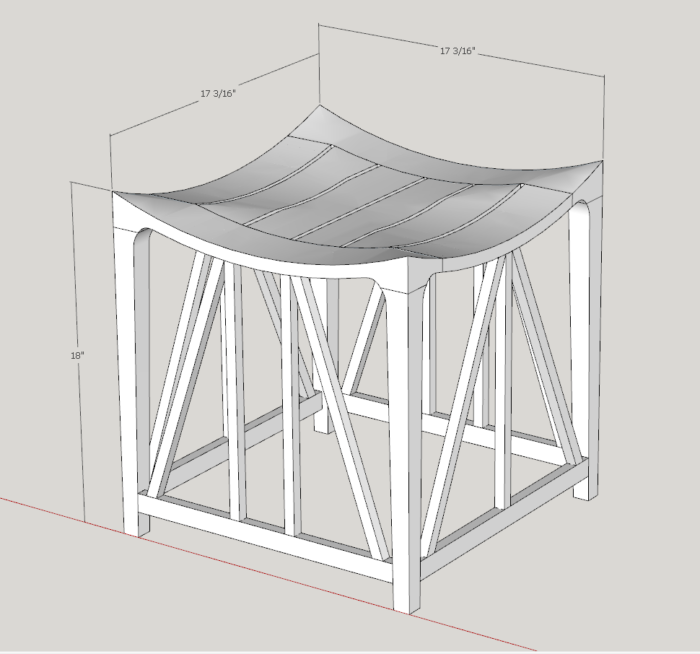 Step 8: At this stage, I work individually on each component to add joinery. So that means including mortise and tenon joints on Stretchers, Seat Slats, and Legs. This is probably the most time consuming step. I don’t know how the original stool was joined and assembled, but assume my choices are possible. 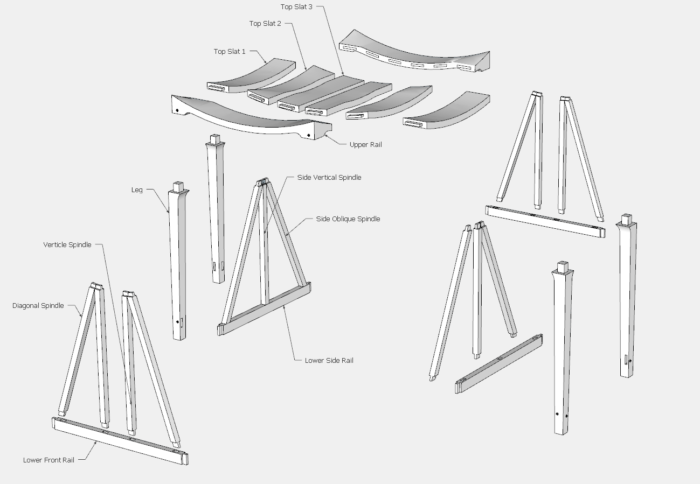 Step 9: The most difficult part of the construction will be the Seat. The complex shapes make it difficult to have accurate mortise and tenon joints in those Slats. So I’m planning for the joinery to be made while the Slats are rectangular in shape. In SketchUp I’ve shown the full size of rectangular planks required to make the slats. The following images show a couple slat rectangular planks in a translucent color over the final shaped version. 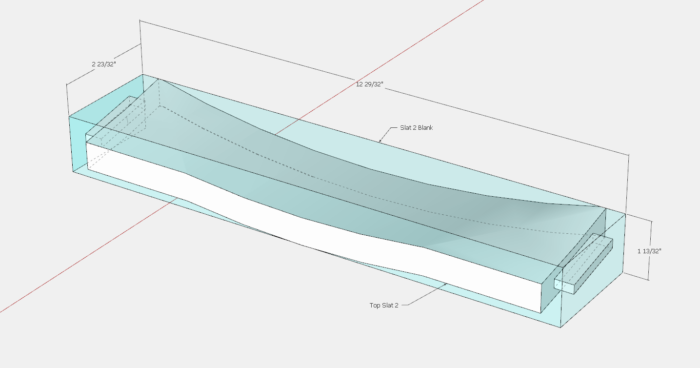 Here is the final SketchUp model. 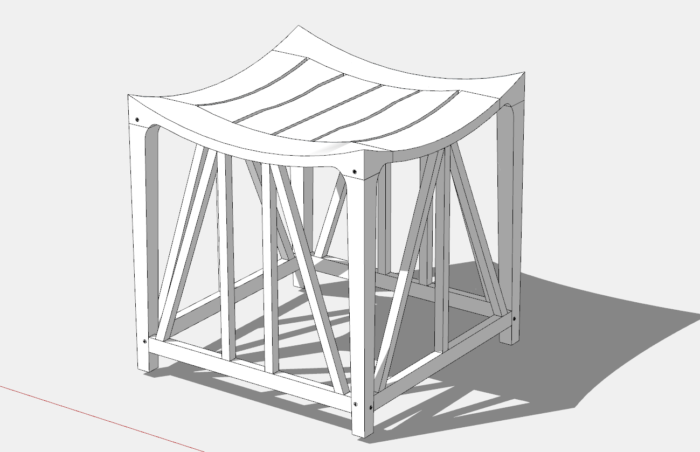 I recently built a Shaving Horse and made a rough representation of the Stool in green wood (fresh-cut Scotch Broom). Here is a picture of that Stool. Nevertheless, I intend to make a much closer reproduction of this ancient piece in normal lumber. 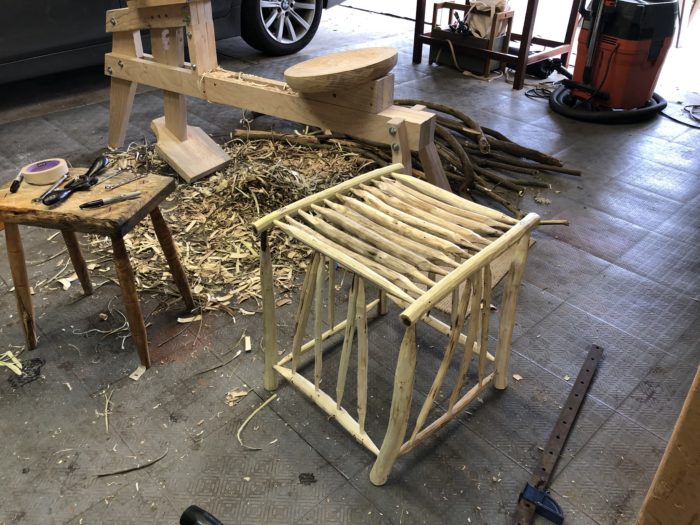