Bill Pavlak and the case of the shrunken drawer backs

While reproducing a piece from Colonial Williamsburg's collection, Bill stumbles upon a mystery that can only be solved through imitation

Everyone likes drawers with a piston fit. Unless of course you happen to be a woodworker, in which case you love them. They become something we strive to create, an indicator of a skill level we aspire to reach, and the gold standard against which we measure our work and the work of others. Things are a little different with antiques. Sometimes drawers still work perfectly after two and a half centuries, but more often they don’t. A lot can happen over the years to deteriorate a drawer’s fit. Of course, centuries of wear and wood movement won’t change the fact that some drawers never fit that well in the first place. Regardless, while assessing my own work or that of others, I assumed that a piston fit was a universal goal, and falling a little short of that was still a worthy outcome.

As I began reproducing an escritoire in the Colonial Williamsburg collection for our annual Working Wood in the 18th Century conference in 2015, I was forced to rethink that notion. Made in Philadelphia by Edward Evans in 1707, this walnut escritoire is, like many early 18th century pieces, well designed, refined on its primary surfaces, but fairly coarse everywhere else – lots of tool marks. Some of the work is sloppy, but most of it is simply efficient. Nothing about the piece was particularly surprising until I began studying the drawers.

I pulled the first drawer from the piece and measured the length of its front and two sides. I figured the back would be the same length as the front, but I’ve studied enough antiques to temper my assumptions and measure everything. Sure enough, the back was 3/16” shorter in the long dimension than the front. As I looked down at the drawer again, I noticed that it appeared trapezoidal even to the naked eye. This was, I guessed, a minor error. Surely something went amiss during construction and the back ended up too short, but didn’t seem worth fixing. They moved on as did I. But there it was again in the next drawer and the next and so on. In fact, the backs were 3/16” shorter in length than the fronts on all twenty drawers in the escritoire. When one part is a little off it’s an anomaly, but when twenty out of twenty drawer backs are shorter than their fronts by the same amount, it’s a method. Why did the shop of Edward Evans build this way?

Quite often drawer parts were undersized to accommodate seasonal wood movement. A classic technique is to make the sides 3/16” shorter than the height of the drawer opening. The drawer would still function smoothly, if its fit was dialed in precisely from side to side. Evans employed a similar tactic in some, not all, of the drawers in the escritoire. Instead of dropping the entire drawer side 3/16,” he tapered them down from front to back as pictured. 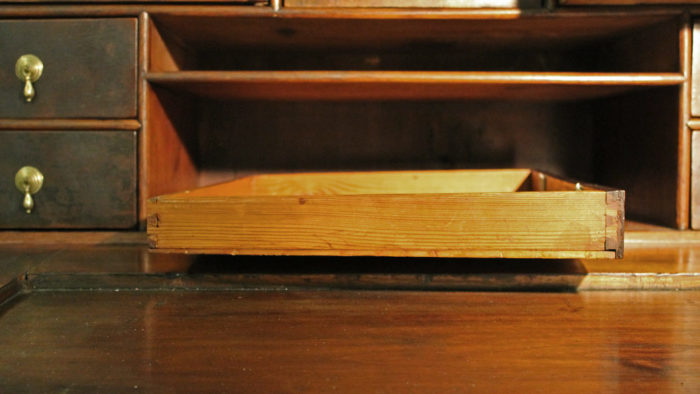 The shorter length of the drawer backs, however, offers no advantage in coping with seasonal movement. I decided that the best way to understand why Evans built this way was to follow in his footsteps and see what happened. I made each drawer front fit its respective opening perfectly, sized up the sides and the shorter backs, then dovetailed them together. Once I construct a drawer, I expect to spend time planing away here and there until I get a smooth fit. This time around however, I simply dovetailed the drawers, nailed on the bottoms (yup, lots of early pieces have nailed on bottoms), and then placed the drawers in their openings. That was it – very little extra fussing and planing. I’ve never spent less time on fitting drawers. Was efficiency in construction a driving force behind this method? Quite possibly, but I’ll never be certain.

Since starting this project, I’ve seen other early pieces with a similar approach. Is this is a great way to make drawers? No, but the overall principle is sound. You can often save time by making the length of a drawer back a little shorter than the front (1/16” maybe) and still achieve an exceptional fit. With the escritoire, the lower drawers rack quite a bit because of this size differential, but the smaller upper drawers work well. They go in loosely without binding until the front closes up snugly. I went into this job expecting to fit drawers like pistons, but came out fitting them like corks and that might not be such a bad thing.