I’ve used a brace and bit for decades to auger through heavy timbers or bore accurate holes that can’t be reached with a drill press, but for years I was rather casual about the quality of my brace and bits and sometimes my efforts were less than spectacular. 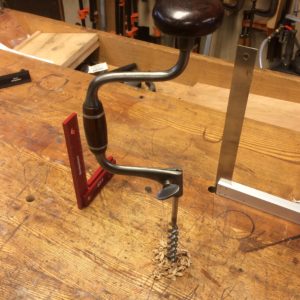 Last week I needed to bore a couple of 3/4-in. holes in the top of my workbench for a low-profile planing stop. I passed on using an electric drill and instead grabbed one of my braces and a self-feeding auger bit to do the job. I used a pair of squares to line up the bit and in less than a minute I had two clean, perpendicular holes in the top. Easy, accurate, and quiet.

I’ve used a brace and bit for decades to auger through heavy timbers or bore accurate holes that can’t be reached with a drill press, but for years I was rather casual about the quality of my brace and bits and sometimes my efforts were less than spectacular.

About a decade ago, I discovered Jennings- 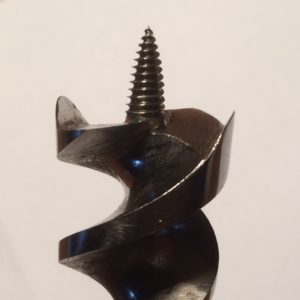 pattern self-feeding auger bits. They are incredible. The fine-thread lead screw is ideal for hardwood and the cutting spurs and lips will quickly and cleanly bore through the toughest wood. Sometime in the late 19th or early 20th century, Stanley started producing the Jennings pattern using the Jennings name concurrent with Stanley. The bits are pretty easy to find on eBay or from used-tool dealers, but you really have to pay attention to the condition of the lead screw, which can simply be worn out, and the spurs and lips, because many of them have been sharpened to death. The lips should be sharpened on the bottom side only. Often I find the tops have been filed and are not flat or parallel, so they don’t cut worth a tinker’s damn. A clue to accurately sharpened lips: As the cut starts, the shavings should start at each lip simultaneously and should be of similar thickness. 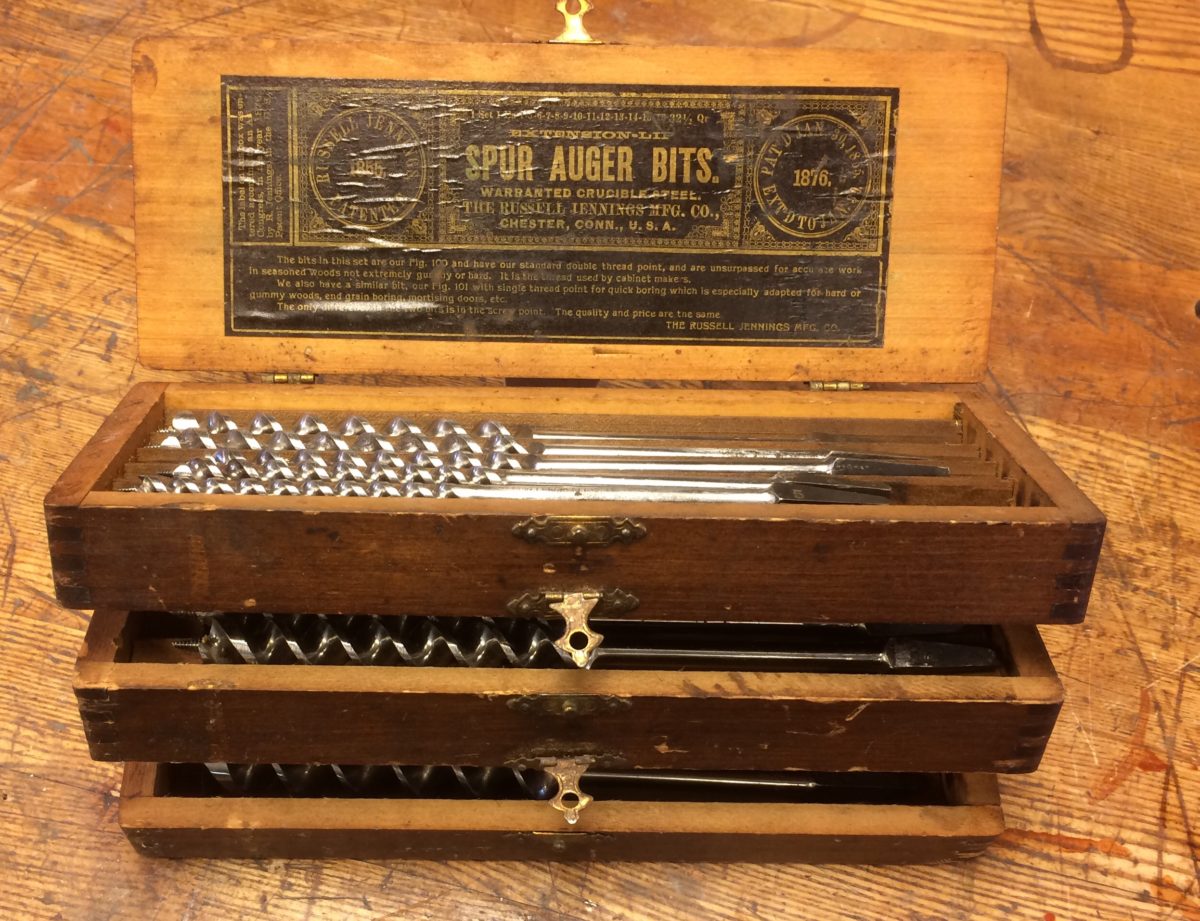 Full sets of Jennings bits can frequently be found on eBay, where if you are diligent and patient, you can find full sets of very serviceable bits for less than $100, or about $8 a bit. The bits often come in their original three-layer hinged box and the typical set consists of 13 bits, numbered 4 through 16, with the numbers correlating to 1/16 in. (a number 4 bit is 4/16 or 1/4 in.). 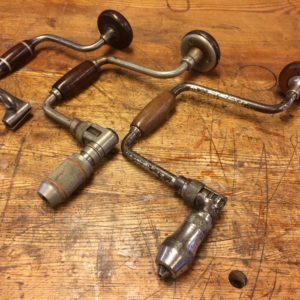 Very good braces are easy to find and are generally inexpensive. Modern braces have a handy ratcheting device built into the chuck that allows forward ratchet, reverse ratchet, and simply locked in place. The forward ratchet is ideal for boring a hole close to a partition or deep in a corner where you can’t swing the handle in a complete circle. It also works great for driving large screws where short arcs make it easier to keep the driver tip in the screw slot. Electric-powered drills simply don’t have the low speed ability of a hand-powered brace, and if you’re using a brace with a 10-in. swing—measured from the center of the handle to the center of the chuck, times 2—a lot of easily controlled torque can be
brought to bear for driving and drilling. 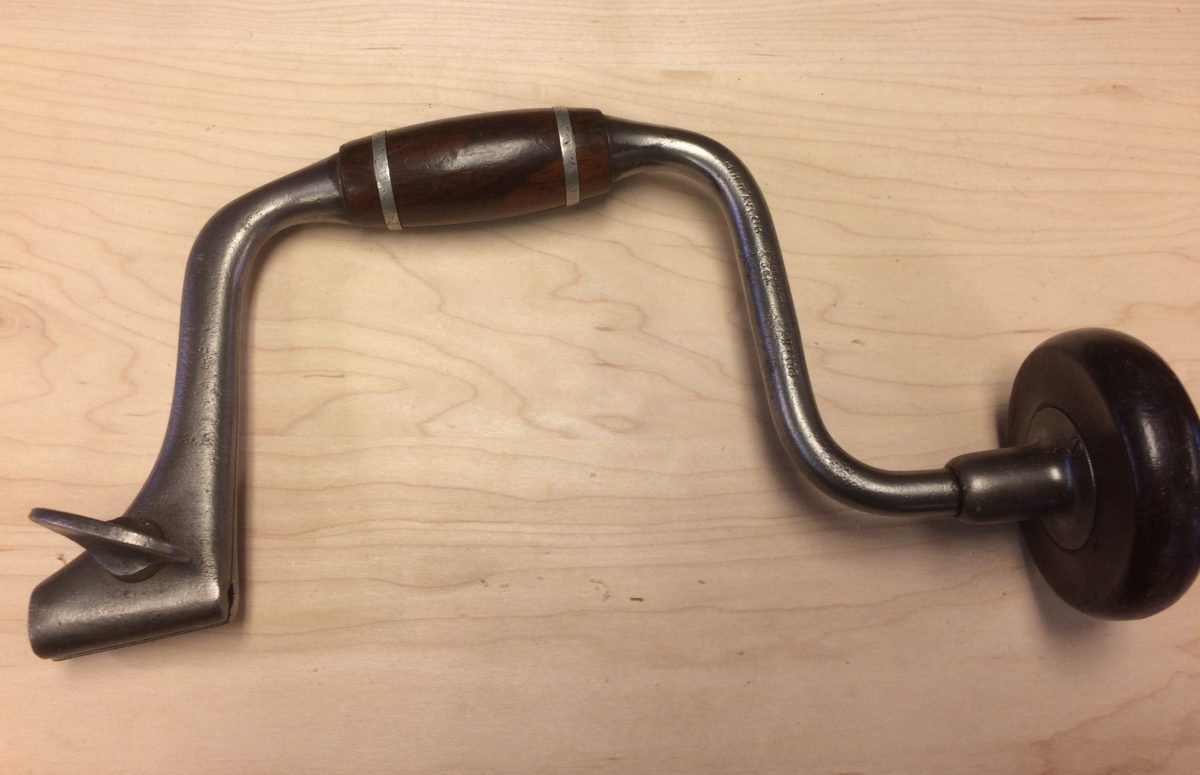 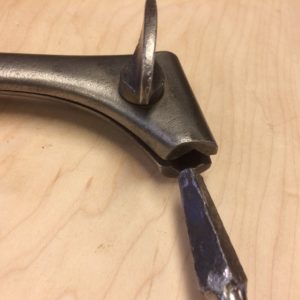 One style of brace that has become a favorite of mine is the Spofford brace, specifically John S. Fray’s beautiful rosewood handled brace with pewter banding on the grip. The Spofford patent is the quick-change bit of its era. A huge thumbscrew pinches a receiver that is internally shaped like the tapered end of the bits and allows quick removal and replacement of the bit with no loss in accuracy of the bit’s rotation. Curtis Buchanan turned me on to this brace years ago; it’s one that he uses for building his beautiful Windsor chairs. Thanks, Curtis. 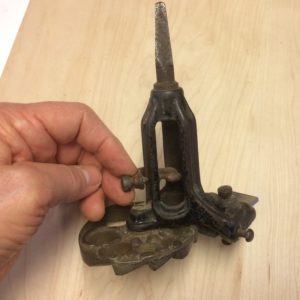 A wide variety of accessories is available for use with a bit brace. You can easily find taper cutters, round tenon cutters, spoon bits, and a host of other interesting toys … er, tools … that will make a bit brace a welcome addition to any shop.

What cool or interesting bit brace accessories do you have?