Some 1,200 woodturners from as far away as Australia assembled at the Tampa Convention Center June 28 to 30 for the American Association of Woodturners annual symposium. Many members had their work on display at the show, while others donated their work to a fundraising auction. The AAW board sat with presidents of local chapters to discuss things like the skyrocketing cost of liability insurance for the organization. But this year as always, the main draw is the demonstrations by leading turners. The variety and breadth of the demonstrations made this symposium one of the best ever. 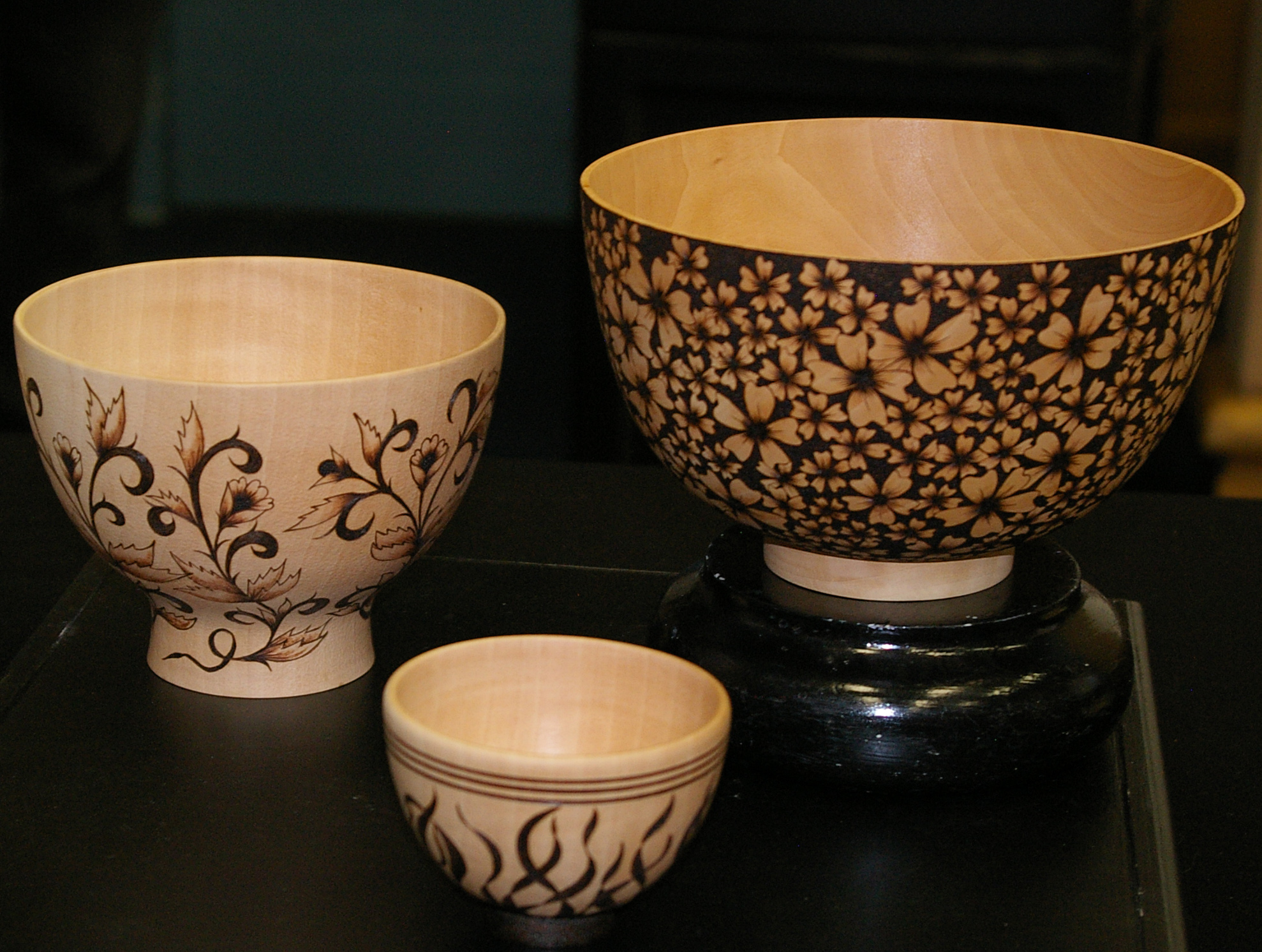 On Friday morning, I began with a presentation by Cynthia and Michael Gibson, who explained how they turn and decorate Asian-style footed bowls (photo-L). Michael, an Englishman, does the turning and Cynthia, a Southern lady, does the burning-applying texture and decoration with a woodburning tool.

Working slowly and methodically, she covers areas of a bowl with a texture of random Vs or dots, or an overall pattern of delicately shaded and tinted flowers. The Gibson’s pieces earned a Best in Show award at the symposium’s exhibition of members’ work.

The couple had plenty of competition on Friday. Noted bowl-maker Mike Mahoney was in an adjacent room demonstrating how to use a bowl-hollowing tool. On the other side, David Ellsworth and Binh Pho-two of today’s most successful turners–discussed the past, present, and future of woodturning with Kevin Wallace, one of the most influential curators of wood art. And if that weren’t enough, across the hall David J. Marks, host of the long-running “Woodworks” TV series, explained how he applies gold and silver leaf to the vessels he turns.

Those were just a few of the 52 demonstration staged on the first day. The attendees faced a similar wealth of choice on Saturday and Sunday as well.  On Saturday afternoon, for example, the lineup of 12 demonstrations included these: Keith Tompkins demonstrating how to turn thin, elaborate finials; Mark Sfirri talking about multi-axis spindle turning, the specialty that has made him widely known; and Hans Weissflog-whose work consists of perfectly uniform, perfectly concentric rings–showed how he turns pierced boxes.

As you might imagine, most of the demonstrations centered on techniques for turning, carving, or embellishing a piece. Others, such as Beth Ireland’s presentation on “Turning With Your Mind” or Tania Radda’s session on “Line and Design in Woodturning” focused on where to find inspiration and how to refine the design of a turned piece.

These symposium sessions are an exercise in extraordinarily intensive inspiration. They represent the greatest concentration of woodturning talent pretty much anywhere in the world. And I can’t imagine how anyone could leave a demonstration and not be totally stoked to try a new technique, refine their use of a tool, or experiment with a new method of coloring or finishing a piece.

While at the show, I met Michael Scarborough, a self-effacing and extremely talented turner who took up the craft after a 25-year career as an opera singer. This was his first time at an AAW symposium. “If I had know that the quality of the presenters would be so high,” he told me, “I would have tried to go to even more demonstrations.”

Something for the Kids

For many years, the AAW symposiums have offered the children of members a chance to learn how to turn. This year, more than 25 kids, supervised by a crew of volunteers, learned how to turn tops, baby rattles, Christmas ornaments, honey dippers, and more. They work at a battery of Jet mini-lathes, donated by the manufacturer.

Buster Shaw, president of Connecticut’s Nutmeg Woodturners League and one of the volunteers helping the kids, told me: “The first day, all the kids stand way back, as if the lathe is going to eat them alive. But by the next day, they’re right up there turning as if they’ve been doing it all their life.”

No trade show would be complete without a roomful of vendors, and the AAW symposiums are no exception. Major retailers like Craft Supplies USA and Packard Woodworks were selling tools and supplies. Many smaller vendors also had a presence, selling tropical and domestic hardwoods, sanding supplies, pen kits, DVDs, books, and more. Stuart Batty, a third-generation woodturner, had the most high-tech booth, giving demonstrations projected onto HDTV monitors and showing off his new line of high-end tools and handles. In all, this year’s symposium included 58 vendors large and small.

It’s almost impossible to leave the vendors’ area empty-handed. I didn’t. I bought a new parting tool from Thompson Lathe Tools (I needed one). And a Robert Sorby hollowing tool (I just wanted one, but I told myself I needed it).

Despite its name, the AAW attracts an international following. Several of the attendees and some of the demonstrators come from overseas: Canada, the Virgin Islands, Ireland, France, England, and Australia.

Membership is at an all-time high, at slightly more than 15,000, with 100 to 150 new members joining each month. The organization has some 300 affiliated chapters nationwide, many of which also have regular demonstrations and mini-symposiums of their own. But nothing can compare with the annual symposium.

Next year’s symposium is scheduled for June 13 to 15 in Phoenix, Arizona. If you don’t already have plans, I urge you to attend.

A portion of the audience at opening ceremonies for this year's AAW Symposium.

Buster Shaw (blue shirt) and other grown-ups helped kids and teens learn to turn at the symposium.

Customers and window-shoppers in the trade show area at the AAW Symposium.

Not all demonstrations go according to plan. Art Liestman got a catch when turning a small box, ruining the piece and forcing him to improvise for the rest of his session.