The $1.5 million in damages awarded in the Carlos Osorio tablesaw case seemed destined to be overturned, considering the facts of the case. Not only was it upheld yesterday, but the Consumer Product Safety Commission voted to propose a tablesaw safety standard that would mandate that saws all sense fingers and retract their blades instantly. The implications for the industry are massive.

In 2004, SawStop’s first cabinet saw hit the market, offering an amazing feature never before seen in woodworking: a blade that instantly senses contact with flesh and snaps out of sight before any real damage can be done. Invetor Steve Gass had tamed the most dangerous tool in the shop, an amazing feat, and unlike thousands of other inventors, actually brought his products to market–himself. Since then, inventor Steve Gass has introduced smaller models of his amazing saw, down to a contractor model, and sold over 28,000 machines in all. His is that increasingly rare, American-manufacturing success story.

The implications were huge for the rest of the tablesaw industry. Did Gass’s wonderful invention render all other tablesaws unsafe? And why hadn’t the rest of the industry adopted Gass’s technology when he first brought to them, or licensed it after he had proven it in the real world? Accusations flew back and forth, with many millions of dollars at stake for both sides. Ultimately the courts would decide.

Faced with an existential threat, the rest of the industry circled the wagons, turning to their long-standing trade association; the Power Tool Institute. Formed in 1968, PTI had already been working on tablesaw safety issues for many years. PTI claimed that Gass’s licensing terms had made it impossible for them to adopt his invention without pricing their saws out of the market, and that his patent is so broadly worded that it would be extremely difficult for them to come up with any technology that did something similar.

The inevitable lawsuit came in 2006, when lawyers representing the insurer of Carlos Osorio, a flooring installer injured on a Ryobi tablesaw, filed a complaint against One World Technologies, Ryobi’s parent company, to recover their expenses. And in 2010, surprising many in the industry, including me, his insurers won $1.5 million in damages. It’s all about subrogation, a legal doctrine used to describe situations like these, where an insurance company is the actual plaintiff, not an individual.

The basis for the decision was Gass’s invention, in other words, that there was a technology on the market that would have saved Osorio’s fingers. But would it, or rather could it, have? Gass has taken larger saws to market, equipped with his device, but I’ve yet to see it work in a jobsite-size saw, the lightweight type that dominates the marketplace and the kind Osorio was using. Then there was what Osorio was doing when he cut into his hand: ripping a strip of flooring with not only the safety equipment removed but without using the rip fence! And ramming it through after it kept jamming. Also, Osorio had received zero instruction by his employer about how to use the saw. So Ryobi was liable?!

Like many others, I was sure that the case would be overturned on appeal, once the defense team had a chance to get its act together and mount better witnesses and experts. It was upheld yesterday, and Osorio’s award stands. The implications for the industry are huge.

New Safety Standard in the Works

The other shoe dropped yesterday, when the Consumer Product Safety Commission voted 5-0 to propose a new tablesaw safety standard that would force every manufacturer to come up with a technology that does basically what Gass’s does, sense hand proximity and brake the blade in milliseconds.

This is a potentially big win for tablesaw users of all stripes, but as currently construed, I found the CPSC’s briefing package, to contain a host of errors and assumptions. While the researchers did talk to PTI, no one called FWW, or any of our expert authors, or any of the other magazines as far as I know, all of whom have been watching the industry and defining best practices for decades. That said, this is an ANPR, or advance notice for proposed rulemaking, and the CPSC is asking for expert testimony. Fine Woodworking is preparing its response, which I can promise will be comprehensive and unbiased.

Although the CPSC report represents an impressive amount to reasearch, there are problems, centering mostly on a weak understanding of a riving knife and its implications. PTI’s response to the SawStop technology–the riving knife and a much improved blade cover–was a huge step forward for tablesaw safety. While quietly trying to develop their own flesh-sensing technology (still no word on that), they got something done that FWW’s authors have been asking for for years. They adopted European-style riving knives (right), and got the Underwriter’s Laboratory to mandate them for all new saws. Every tablesaw manufacturer, including SawStop, has complied with the voluntary standard. 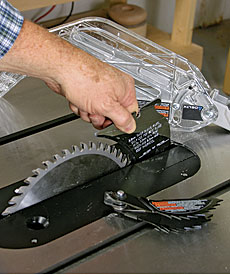 Roughly 40 percent of hand-to-blade contact on the tablesaw (depending on how you read the data) is caused by kickback, and kickback causes many other injuries, too. The riving knife is a cost effective way to eliminate kickback–completely. It works on all types of saws, adds just a few dollars to their manufacture, has no complicated electronics, and it almost never has to come off the saw for any type of cut. And when it does, it goes on and off in seconds. That’s not to mention that the riving knife lets the user concentrate on Job 1, keeping one’s precious digits intact. Also, more use of the riving knife will mean more use of the blade cover too, which snaps on and off easily on most new systems, and that will further reduce incidences of hand-to-blade contact, perhaps dramatically. The old safety gear definitely got discarded, in fact that’s partly why Carlos Osorio got hurt (no splitter or blade cover in place), but riving knives won’t be.

But the CPSC document is based on data from before the UL mandate, when people threw their splitters in the corner of the shop to gather dust. That’s my main problem with the CPSC finding so far: It does acknowledge the new UL mandate about riving knives, but does not fully acknowledge the implications.

I put these and many other questions to Steve Gass over the past day, and his answers have been quick and candid. Go here for our full Q&A.

An untrained laborer, who cut into his hand while ripping oak flooring without using the rip fence, won a massive award from the parent company of Ryobi Power Tools. The decision was made in part because Ryobi had neglected to incorporate SawStop-style flesh-sensing brake technology into its small jobsite saws.

A riving knife can stay on the saw for almost every type of cut, since it sits just below the top of the blade, and stays that way when you move the blade up or down or angle it sideways. It keeps the workpiece right on track, preventing it from pivoting onto the back of the blade and kicking back. This allows you to concentrate on the most important thing, keeping your fingers out of harm's way.

In this still from a Discovery Channel documentary on the SawStop, inventor Steve Gass puts his money where his finger is--tripping the blade brake with his own hand.

Every tablesaw manufacturer, including SawStop, has complied with a voluntary standard to include European-style riving knives. This includes portable tablesaws like Bosch's 4100DG.