It’s not too often that woodworkers get a center-stage spot on national television. So when Fine Woodworking was approached by the producers of the Martha Stewart Show to be a part of an “all-things-woodworking” episode, we jumped at the opportunity.

FWW editor Asa Christiana jumped on a train to New York along with me for a special taping of the show that even included the work of Stewart’s brother, Eric Scott, himself an accomplished woodworker whose Maloof-inspired chair was featured in one of the segments. We were honored to hear that Scott decided to tackle the classic rocker after having seen it on the cover of Fine Woodworking #207 (Remembering Sam Maloof). Also appearing with Eric was his teacher and mentor, woodworker Charles Brock, who teaches classes down in Georgia on how to Build a Maloof-Inspired Rocker.

Asa appeared near the top of the show, answering questions from Martha concerning the resurgence of the craft–especially hand tool-use. You’ll have to watch the show to get all the details though, as I don’t want to give away the farm!

The episode also included an appearance by Maine bowl turner David Lancaster, who rolled out a super-sweet One-Way Lathe for a turning demo. While watching Lancaster, it became very apparent that this fellow has turned out thousands-upon-thousands of bowls. The speed with which he can craft a beautiful item is just astounding, and a true pleasure to watch.

An appearance by actor Nick Offerman was also a heck of a lot of fun. Offerman, who plays the roll of Ron Swanson on the NBC television show Parks and Recreation, is also an avid woodworker and was on-hand to demonstrate his method for building custom canoe paddles. 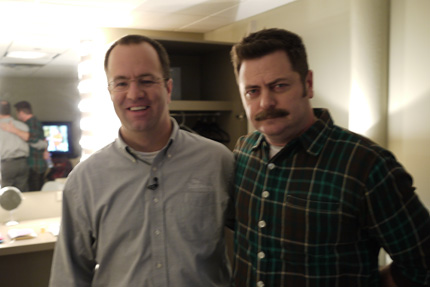 A super-enthusiastic woodworker, Offerman met up with Asa backstage (left) after the show and might, just might, be interested in producing a shop tour with us some time in the near future. He’s apparently a longtime reader of the magazine. Be sure to have a look at his beautiful work. His boats are of particular interest to anyone thinking about crafting a woodstrip canoe or kayak.

In the end, the show went off without a hitch and really honored the craft in a way that’s long overdue. Cheers to Asa, Eric, Nick, Charles, and David for a job well-done!

Asa kicks his feet up backstage in the dressing room, ahead of the show.

Asa (R) chats with Charles Brock on the set, following the show. The ceiling was absolutely covered in lights--I mean bathed in 'em!