The recent death of Sam Maloof came as a blow to the art and woodworking community but the public can still enjoy his work at museums across the country, including a new, short-term exhibit at The Riverside Art Museum (RAM) in Riverside, California. 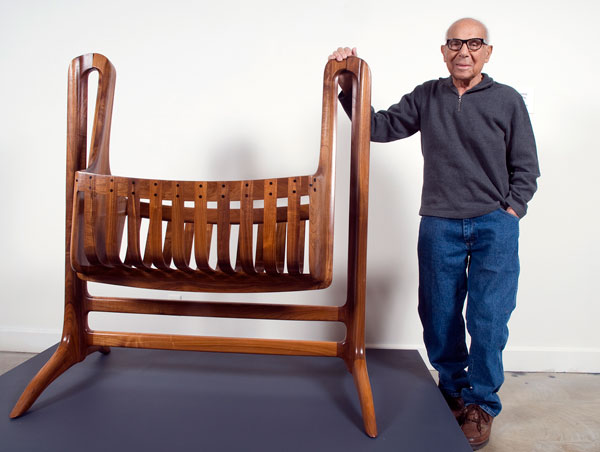 Maloof with cradle on display at Grace and Grain.

Titled Grace and Grain, the exhibit includes some of his most recent and previously un-exhibited works. The exhibit was designed to celebrate the work of woodworking’s most iconic figure. It opened to the public before his death on April 2 and the display will be on view until July 2, 2009.

This retrospective features some of Maloof’s signature pieces, drawings, and works that were still in progress. The three never-seen-before pieces include a chair, chaise lounge rocker, and leather rocking chair (photos top of page). “They were the last pieces designed before his 93rd birthday,” said Maloof’s business manager Roz Bock. 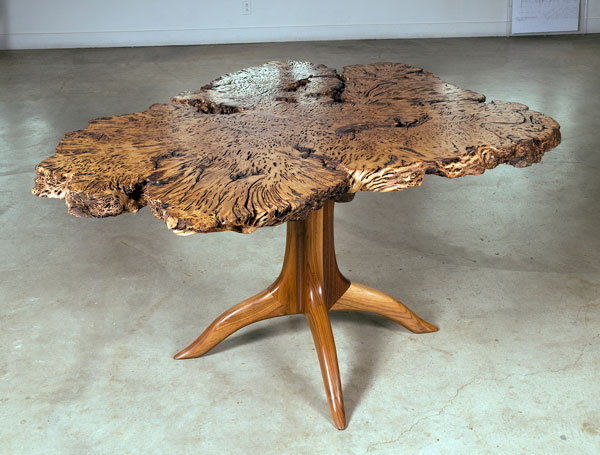 Another piece on display.

“When we visited him at his workshop a month or two before the exhibit they weren’t finished,” said RAM Museum curator Lee Tusman. What makes these one-of-a-kind pieces so special is that these are some of Maloof’s last known works.

Grace and Grain is also showcasing notable works from past decades including ecclesiastical structures originally made for a local congregation in the 1960s. The pieces actually were housed in a Methodist church that has since been sold. “The pieces came back to [us] to be refinished,” said Bock. 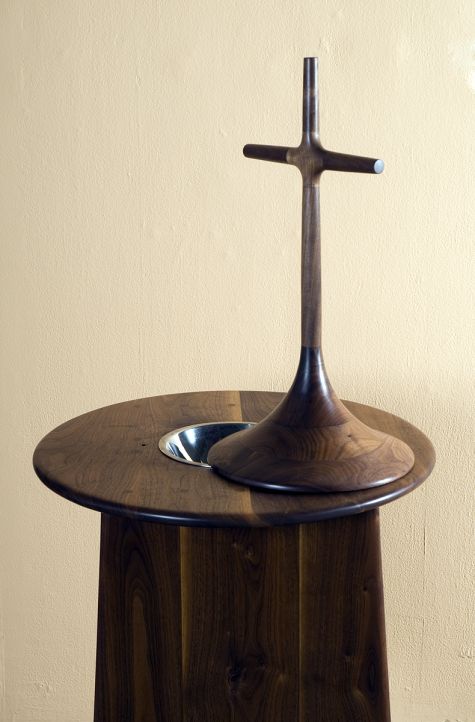 A Grace and Grain exhibit piece that once was housed in a Methodist church.

For those that have followed Sam Maloof’s career throughout the years, it will be no surprise that the master woodworker kept busy at his workshop until the age of 93. With a career spanning half-century, Maloof left behind some of this world’s most beautiful and intricate furniture pieces always keeping form and function at the forefront of all designs. “[Maloof’s] work inspires you to find beauty,” Tusman said.

When it comes to his own art, Maloof stated “I want to be able to work a piece of wood into an object that contributes something beautiful and useful to everyday life”.

For information on this exhibit visit the museum Web site.

As one of Maloof's last known works, the chair was was finished specifically for The Riverside Art Museum's Grace and Grain exhibit.

Maloof completed this leather lounge rocker just this past year. The rocker is featured in The Riverside Art Museum's Grace and Grain exhibit.

This beautiful and intricate table will be showcased until July 2, 2009 at the Grace and Grain exhibit.

This Maloof leather rocker is featured in the Riverside Art Museum's Grace and Grain exhibit. It is one of the previously un-exhibited pieces featured.