VICTORIA, B.C., CANADA–Chris Mroz tied the thin length of “compressed wood” into a knot and passed out another 50 sample pieces so the crowd could give it a try. You really had to bend it for yourself before you could believe his claim of the machine that can make hardwood lumber as flexible as rubber.

Dressed in a polo shirt and slacks, Mroz was demonstrating his bendable wood last week at the Furniture Society Conference here, and more than 100 furniture makers looked on with interest.

Eugene Rubin, a woodworker from Victoria, said he can already imagine uses for compressed wood. Rubin makes traditional bent willow chairs in the Adirondack tradition. “I see this as an opportunity to build my chairs with new materials,” he said.

How it works
The machine used to create the bendable wood is called a Compwood machine, and it was developed in the 1980s by the Danish Technical Institute. The patented lengthwise compression process breaks the lignum bonds in the wood essentially making it flexible in any direction. Mroz purchased his Compwood machine from a lumber mill that produced bendable wood until it went out of business. 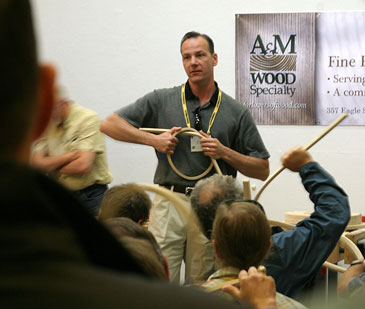 All tied up. Chris Mroz demonstrates the flexibility of his compressed wood at the Furniture Society Conference in June 2007.

The process works like this: First, a length of air-dried lumber is steamed for about 46 hours. Then, it is compressed end to end. During the process, a 10-ft.-long board compresses to about 8-ft. long. After the pressure is released and the board extends back to about 9-ft., it is held extended overnight to regain its straightness before it is ready for use.

For the compressed wood to stay flexible, it must retain a high moisture content–about 25%–so it is immediately wrapped in plastic. The typical shelf-life of compressed wood when properly stored is two or three years Mroz said.

The compressed wood is shaped by clamping it to a form, similar to the steam-bending process. When the wood dries, it holds its form.

A learning process
Through trial and error, Mroz said he has learned a lot about the opportunities and limits of compressed wood. For instance, only certain wood species react well to the process, including ash and white oak. The material has to be clear of knots and complex grain. And because the wood has to be air dried, Mroz has only experimented with North American hardwoods.

“The wood has to start green, which is why I haven’t tried exotics,” Mroz said. “It’s hard to find a supplier of air-dried exotic woods.”

The compressed material also has some tooling issues, Mroz said. It can be sanded and sawn without a problem, but it doesn’t plane well. 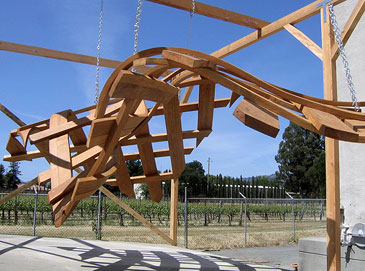 Bends in the road
In addition to designing and building bentwood architectural components through his company Fluted Beams LLC, in Gig Harbor, Wash., Mroz also supplies the material to other furniture makers and architects. He has a few regular customers, and was among three finalist chosen by architect Frank Gehry to build a model for a planned 36,000-sq.-ft. wood trellis which Gehry plans to erect.

In addition to testing out the technology, Mroz said he is also testing out his success selling bendable wood on a commercial scale. “It’s not a profitable business yet,” he said. “I make a lot of expensive firewood.”